The results of the project

The project “Satellite enhanced snowmelt flood and drought predictions for Kabul River basin with surface and groundwater modeling”, jointly with USAID and the National Academy of Sciences for Central Asia

This article highlights the results of the project "Satellite enhanced snowmelt flood and drought predictions for Kabul River basin with surface and groundwater modeling".

The territory of the Kabul river basin is characterized by an arid climate with limited availability of surface water resources, a sufficient amount of water is mainly available due to drilling in the aquifers of groundwater. With an increase in the population of Afghanistan, the need for groundwater intake for domestic and agricultural purposes increases. Especially the capital Kabul, as the fifth fastest growing city in the world (ADB), is one of the cities experiencing water shortages with an average per capita water supply is 20 liters per day, compared with the recommended level of at least 80 liters per day (Asian Development Bank, MAR).

Over the past decade, the aquifers of the Kabul River have been intensively exploited, causing a sharp drop in water levels. According to the U.S. Geological Survey, groundwater levels in the city of Kabul fell on average by 1.5 meters per year during 2008 - 2012 (Thomas J. Mack, 2016). Water supply in the city of Kabul is under serious threat due to excess of groundwater level, severe pollution by sewage. The excess water in the city of Kabul is partly due to poor management and the long period of war and instability in Afghanistan, as well as the lack of data on the volume of seasonal melt water, the depth of snow cover and freezing ground.

With the development of technology, it is possible to use various methods for quantifying groundwater resources, measuring snow cover, modeling and forecasting floods, for this purpose a joint project USAID and the National Academy of Sciences “Satellite enhanced snowmelt flood and drought predictions for Kabul River basin with surface and groundwater modeling”, the participants of which are scientists from Afghanistan, Pakistan and Kazakhstan.

During the implementation of this project, a tripartite approach to activities has been implemented. Afghan and Pakistani scientists have simulated the floods of mountain peaks and ridges of the Kabul River Basin using satellite technology, collected and processed MODIS satellite data. From MODIS data using DEM for altitude zones, using the ArcMap, the volume of NDSI snow and elevation zones was calculated, and climate changes were estimated using a melt runoff model.

Soils were studied, including subsidence, groundwater using InSAR satellite interferometry. The studies present indicators of population displacement in the Kabul, Afghanistan data were extracted using InSAR time series analysis of both ascending and descending orbits of CBand Sentinel-1 products covering the period from 2014 to 2018, and combined to estimate the two-dimensional (2D) surface displacement field InSAR. In this study, conceptual and numerical models for the lower levels of the Kabul river are developed, and hydrogeological conditions are modeled using the GMS groundwater modeling system with model calibration in steady and transient states by trial and error.

Using the modified Hargreaves-Samani model with correction factors for Central Asia (Gafurov, 2018), in these studies, the reference Evototranspiration (ETo) in the Kabul river basin was calculated. Evapotranspiration (ET) is a key parameter in hydrological and agricultural sciences, Fig.1. The potential ET (PET) is used mainly for hydrological sciences, and the reference ET (ETo) is used in the agricultural sciences (Xiang, 2020). 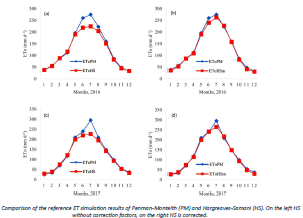 ETo is used to estimate irrigation demand and is the most water-consuming sector in the world (AQUASTAT, 2020). The developed model was tested at two locations, and both are agricultural fields of the Kabul River Basin region, as examle an ET coefficient map of December (Fig.2). The difference (convergence) of the results between the original HS model and the modified HS version for one location is determined and demonstrated, located downstream from the Kabul river basin, which indicates a higher ETo value. The differences between the initial and modified simulations in space are more significant in time (step - month). Modified HS estimates for ETo are lower in April in most parts of the Kabul River Basin, but the opposite is true in July. The annual difference ranges from 10 to 70 mm ETo throughout the pool. The difference is significant in terms of hydrological and agricultural studies. The hybrid model (modified smaller monthly data sets based on HS + Remote Sensing) can be a very useful tool for hydrological and irrigation modeling for the Agro-industrial complex, adapted to the Central Asian region and can be used to create Evapotranspiration datasets with very high resolution. 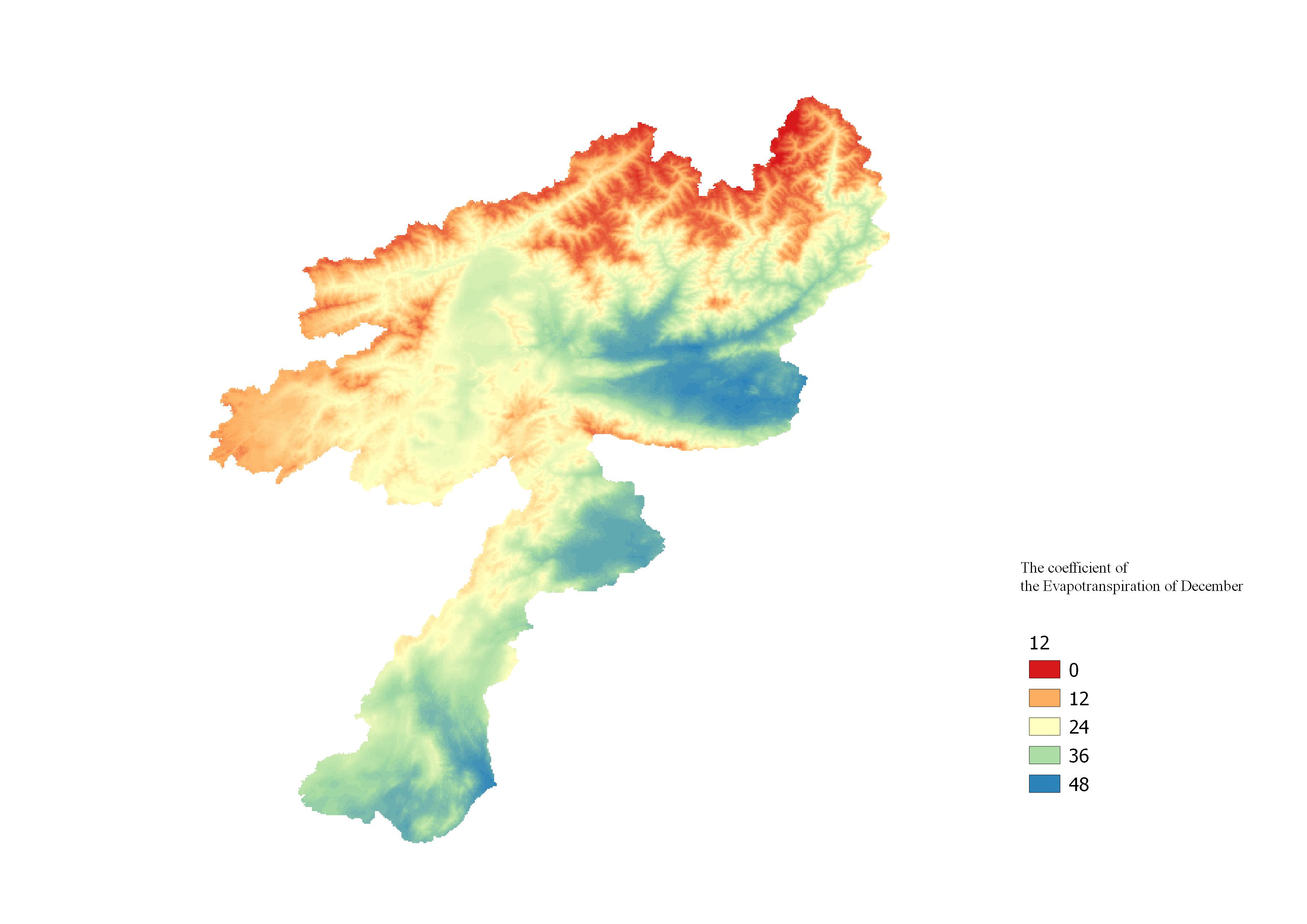 Also, as part of the project, GNSS differential stations have been installed in the participating countries, included in the network of the Laboratory for Geodetic and Space Analysis of the Earth - SEGAL, distributed in Europe, Africa, South America and Asia.

A geodetic training ground has been created in the Republic of Kazakhstan, at which training seminars and programs have been held as part of the exchange of experience among students and scientists of the countries participating in this project.

All systems and equipment created during the implementation of the project successfully operate for scientific needs, for use in planning, forecasting agricultural work and emergency situations. Photos, videos, publications, research reports are available on the official website of the project.

The results of the project “Satellite enhanced snowmelt flood and drought predictions for Kabul River basin with surface and groundwater modeling” are of high scientific and practical value for all project participants. Publications, studies, training material are applicable for the educational process, for the agro-industrial complex, for use in subsequent projects and are open to everyone who wants.